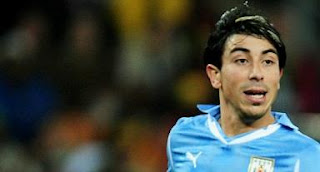 Porto defender Jorge Fucile has reportedly welcomed interest from Chelsea and Liverpool. Andre Villas-Boas has been linked with a move for the Uruguayan full-back in the past, and reports now suggest that the Blues were back in the hunt. A Bola is now states that the 27-year-old has welcomed interest from the Barclays Premier League pair, and after rejecting the chance to move from the Primera Liga in the summer, he's willing to make the switch if either club meets his minimum fee release clause - £16.6m. Italian giants Inter Milan are also said to be keen on the player, with Villas-Boas' relationship with the player built during a season together with the Dragões. Despite nobody making the move, Villas-Boas continues to be linked with his former Porto stars, and Fucile is the latest in a long line of players emerging on the Chelsea radar.
Email ThisBlogThis!Share to TwitterShare to FacebookShare to Pinterest