Striker wants out and is open to offers 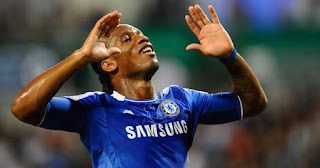 Didier Drogba is ready to leave Chelsea. Reports suggest he has finally given up hope of being offered the contract he wants by Chelsea and is ready to leave the club. Drogba, who struck his 150th goal for Chelsea in Saturday's 3-1 defeat by Aston Villa, is now ready to sign a pre-contract agreement, with several clubs offering him lucrative deals, including Chinese side Shanghai Shenhua. Drogba, who did not even make it on to the bench at Wolves yesterday, was denied a two-year contract and expects to leave in the summer. He could go this month should relations worsen. A source close to Drogba said: "Didier did want to stay. But it has gone too far now. He has a number of offers."
Email ThisBlogThis!Share to TwitterShare to FacebookShare to Pinterest