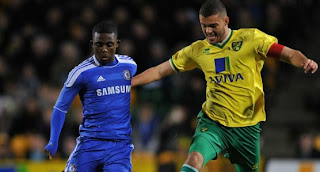 After a relatively uninspiring opening 45 minutes, in which Lucas Piazon's wonderful strike was the one ray of light, the game came to life in the second half. Norwich's James Vaughan equalised within minutes of the restart with a powerful header, before goals from Richard Brindley and Jamar Loza sent the home side into what appeared to be an unassailable lead. Blues substitute Islam Feruz, however, had other ideas, and after he had pulled us back into the game with a diving header in the 72nd minute, he equalised with a truly majestic strike six minutes later.