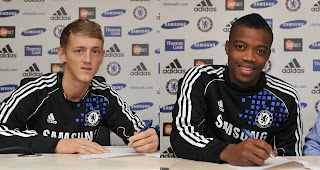 Three members of Chelsea's reserve team squad have signed new contracts. Nathaniel Chalobah (above right), who was on the substitutes' bench for the first team at Wolves on Monday, signed for two and a half years, committing himself to Chelsea until 2014. Having turned 17 last month, this is his first professional contract. George Saville (above left) who is 18 years old signed for three and a half years, taking him to 2015, and Adam Phillip has been given a 12-month extension to his existing contract which was due to run out in the summer, so he is now signed for the next 18 months.