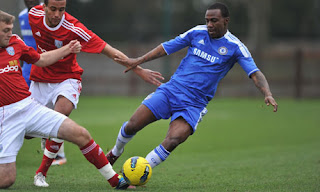 Gael Kakuta has joined Dijon on loan for the rest of the season. It is the second loan this campaign for the France Under 21 international. He spent the first half of it at Bolton Wanderers where he made six appearances and scored one Carling Cup goal. Kakuta, who is aged 20, joined Chelsea in 2007 and is under contract until 2015. He has made five starts for the first team so far with 11 substitute appearances. He also gained experience during a spell at Fulham in the second half of the 2010/11 season when he made seven appearances. Dijon are currently 13th in the French top flight and have in their squad Lesly Malouda, younger brother of Florent. We wish him well.
Email ThisBlogThis!Share to TwitterShare to FacebookShare to Pinterest