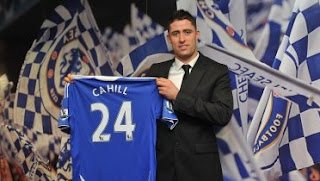 England defender Gary Cahill has moved to Chelsea from fellow Premier League side Bolton for a reported £7m fee. Cahill is likely to line up in central defence alongside John Terry at his new club, which is currently fourth in the table after 21 of 38 matches. He will be allowed to play for Chelsea in the FA Cup, having not featured for Bolton in the third round of the tournament. Cahill said: "Chelsea is a massive club; it is a club that looks to win trophies season in, season out, and it's a big opportunity for me to be a part of that. Opportunities like this you can't turn down." Happy days.
Email ThisBlogThis!Share to TwitterShare to FacebookShare to Pinterest