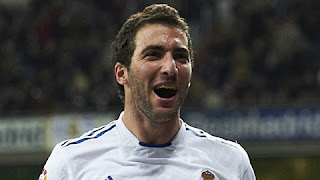 Striker Gonzalo Higuain has no desire to leave Real Madrid for a move to Chelsea, according to his agent and father. Higuain is under contract at the Bernabeu Stadium until June 2016 but recent reports have suggested that he could be set to leave the Spanish giants in this month's transfer window. Chelsea and Juventus have both been linked with the Argentina international but Jorge Higuain, his agent and father, has insisted that his 24-year-old son has no wish to leave the Spanish capital and is happy at Real. "Nobody at Real Madrid has said anything about wanting to sell Gonzalo and he doesn't have any intention of leaving," Higuain senior told La Stampa.
Email ThisBlogThis!Share to TwitterShare to FacebookShare to Pinterest