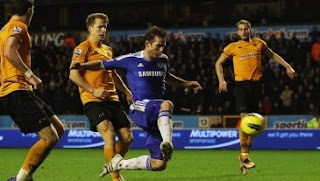 Frank Lampard scored in the 89th minute as Chelsea secured their first win in five Premier League matches after they beat Wolverhampton Wanderers 2-1 at Molineux. For most of the second half, Ramires's 54th-minute strike looked enough to see the beleaguered Blues bounce back from their morale-crushing 3-1 home defeat to Aston Villa on New Year's Eve and complete a league double over another side from the Midlands, only for Stephen Ward to equalise five minutes from time. With time running out for Chelsea and their under-pressure manager Andre Villas-Boas, Lampard came to their rescue with a goal a minute from time that keeps the Blues in the race for a Champions League place.

With Didier Drogba and Daniel Sturridge both sidelined through injury, Fernando Torres was handed a rare start at the beginning of a month in which Drogba's impending departure for the Africa Cup of Nations should see him get a great deal more first-team action than he has of late. The Spain striker was once more unable to fully shake himself out of the malaise which has blighted his career since joining Chelsea a year ago, spending far more time out wide or dropping deep in search of the ball than at the apex of the Chelsea attack. His creative contribution and work rate were both significant, though. In the early stages Torres swept a nice weighted pass forward for Juan Mata which forced a point-blank save from Wayne Hennessey, and then he snuck a ball through for the returning Lampard, who was denied a clear shot at goal by Richard Stearman. However, Torres still looks a long way off the player Chelsea owner Roman Abramovich hoped he was getting when he paid £50 million for him last January. After that spate of early chances for Chelsea in which Ramires also fired into the side netting, Wolves gradually began to look like earning a reward for their characteristic hard work.

Just after the half-hour mark two free-kicks from the right by Adam Hammill led to the clearest two chances of the half. One delivery was headed against the outside of the far post by Roger Johnson while the other was glanced wide by Stephen Ward when he found himself unmarked in the centre of the area. Hammill had been involved in an incident midway through the half when he was caught late by Lampard after making a clearance. Referee Peter Walton booked the veteran midfielder, but the manner is which Lampard's studs came into Hammill's ankle would have been interpreted differently by other officials. Hammill was himself booked soon afterwards for his complaints about Lampard only receiving a yellow card, while Wolves manager Mick McCarthy continued to remonstrate with fourth official Howard Webb. In the closing stages of the half Chelsea had their best chances up to that point, with Jose Bosingwa's strike from range being saved by Hennessey, and from the subsequent corner John Terry headed over the bar.

McCarthy responded at half-time by bringing on Matt Jarvis, and the winger soon made his presence felt when his cross was met on the half-volley by Hammill, only for it to be blocked by a defender en route to goal. Soon afterwards Ramires had Chelsea in front with his fourth league goal of the season. The ball fell to the Brazilian's feet inside the area at a corner and he span 360 degrees to evade the attentions of Ward before firing his strike into the roof of the net. Perhaps in response to newspaper reports on Monday that there was an "open mutiny" in the Chelsea squad against Villas-Boas, Ramires led a group of the club's Portuguese-speaking contingent over to the bench to celebrate with their manager and his staff. Terry joined the celebrations late, while Lampard did not bother. After taking the lead Chelsea looked comfortable as they bid to close out a vital win, but they were made to pay for not adding to their lead on 85 minutes when Ward levelled.

Jarvis scooped a weighted pass over the top for Steven Fletcher – who only started on the bench due to a knock – and the Scotland striker guided the ball back across goal for Ward to drill low past Petr Cech for his third of the season. That goal looked to be enough to get a result at home to Chelsea for the second year in a row – having beaten them 1-0 at Molineux almost exactly a year ago to the day – until Lampard struck. The England man fed Torres on the edge of the box and continued his run. Torres threaded the ball out to Ashley Cole, whose cross was steered home by Lampard from close range for his ninth goal of the campaign. There was still time for some late drama when Cech tipped Kevin Doyle's header over the bar with the last touch of the match, but Chelsea sealed the win and can now look forward to fixtures against Sunderland, Norwich and Swansea before January is out.