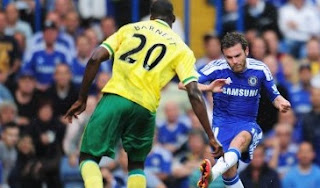 This may be Chelsea’s last stand for their Premier League title hopes. Bolstered by their new signing and the return of a key midfield cog, the Blues travel to Carrow Road on Saturday afternoon for a key clash with surprising Norwich City. Chelsea are currently holding down the final Champions League spot in fourth place, four points better than Arsenal and Newcastle but six behind third-place Tottenham. A win for the Blues, though, could tighten the standings since table-leading Manchester City host Spurs and second-place Manchester United travel to the Emirates Stadium to face the Gunners.

Chelsea have won back-to-back matches and taken points in eight of nine following last Saturday’s 1-0 win over Sunderland. While Fernando Torres again failed to score, Frank Lampard cleaned up the rebound of his shot off the crossbar in the 13th minute for the match’s only goal. Despite Torres’ inability to find the back of the net, manager Andre Villas-Boas opted to strengthen the back line in the transfer window by acquiring Gary Cahill from Bolton Wanderers. As Cahill begins to mesh with his new teammates, midfielder Michael Essien made a surprise return to the pitch. He entered as a substitute for Lampard in the 73rd minute for his season debut after injuring his knee in training camp. Lampard, who has scored goals in his last three matches overall, has two goals and two assists in three lifetime matches versus Norwich City.

The Canaries have 28 points, the most among the promoted teams, and are two points clear in ninth ahead of fellow newcomers Swansea City. If they can hold that position, it would be the best finish by a promoted side since Reading finished eighth with 55 points in 2006-07. Norwich manager Paul Lambert’s squad has momentum with three wins on the trot overall and points in six of seven league matches following a 2-1 win at West Bromwich Albion last Saturday. Steve Morison secured the full three points in the 79th minute with his eighth goal of the season and third in three matches. Norwich also made a move in the transfer window, bringing in midfielder and Leeds United captain Jonathan Howson.

Lampard broke a 1-1 deadlock with a penalty kick in the 82nd minute as Chelsea won this season’s earlier fixture 3-1 at Stamford Bridge. The game also featured a frightening collision between Didier Drogba and Norwich goalkeeper Jon Ruddy, with the former leaving the pitch on a stretcher unconscious due to a concussion.

Norwich City
Goalkeeper Declan Rudd is out for two months after injuring his knee in training so third-choice Jed Steer comes into the squad as cover for John Ruddy. Full-back Marc Tierney is back in training after recovering from a groin injury. On-loan defender Ritchie De Laet returned to Manchester United in midweek while centre-forward James Vaughan and defender Elliott Ward (both knee) are back in training and continuing to progress.

Chelsea
Gary Cahill could make his Chelsea debut but is unlikely to start. The defender, who finally completed his £7m move from Bolton on Monday, may have to make do with a substitute role as he settles into his new surroundings. Branislav Ivanovic could earn an immediate recall at right-back after a month out injured, the fit-again Michael Essien is in contention to start after making his comeback from the bench on Saturday, but the game comes too soon for John Obi Mikel (hamstring).

Chelsea have picked up the most cards in the Premier League this season (48 yellow, three reds)

41 per cent of the goals Norwich have scored have been headers, the highest proportion in the top flight

Norwich have also conceded the lowest percentage of goals from headers (11 per cent)
Email ThisBlogThis!Share to TwitterShare to FacebookShare to Pinterest