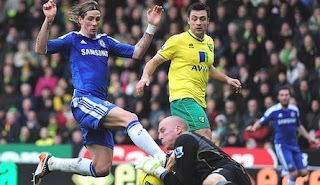 Chelsea's winning streak of 2012 is over after a well-contested but ultimately disappointing trip to Carrow Road. Despite creating the better opportunities over the 90 minutes, the Blues could not beat an organised Norwich side with goalkeeper John Ruddy in inspired form to help earn his side their first clean sheet of the season. Ruddy pulled off several classy stops as an increasingly desperate home side battled manfully to keep out the visitors after the break. With four of the top five meeting on Sunday, the Londoners knew they had a wonderful chance to reduce the 11-point gap on leaders Manchester City.

Chelsea lacked urgency before half-time, and when they did step up the pace, Ruddy twice saved brilliantly from Juan Mata and also denied Ramires. Raul Meireles also shot over while Torres squandered the game's best opportunity when he shot wide from 10 yards following great work on the right by Jose Bosingwa. The outstanding moment and best chance of a first half also fell to the Spaniard when he forced a superb fingertip save from Ruddy. An incisive counter-attack involving David Luiz, Frank Lampard and Ramires freed Torres but his brilliant, curled effort with the outside of his right foot was just kept out by the home keeper. Those two chances just about summed up the Spaniard's day and indeed his Chelsea career, brilliant in one moment and woeful the next.

The same cannot be said of the Canaries, who thoroughly deserved a draw for a stirring rearguard performance in which Zak Whitbread and Daniel Ayala were outstanding. Norwich barely had a touch in the opening five minutes but soon settled and their front duo of Holt and Steve Morison provided a strong goal threat and the hosts were by no means second best in the first period. Their best opening saw Holt fire narrowly wide after a confident surge forward and brilliant piece of control and pass from Morison. The lively Anthony Pilkington also twice nearly set up goals, and Bradley Johnson could easily have put City ahead but his shot from the edge of the box deflected off John Terry and into the arms of Petr Cech.

Unsurprisingly, Chelsea, who resisted the temptation to include new signing Gary Cahill in their squad, looked to Mata for their creativity and the Spaniard once again did not disappoint. He teed up several half chances and close calls and also shot over after a mazy 40-yard run and was always involved as Chelsea started to boss possession and create chances at will after the break. But despite racking up the chances, they could not find a way past Ruddy, whose heroics ensured Norwich stay unbeaten this year.