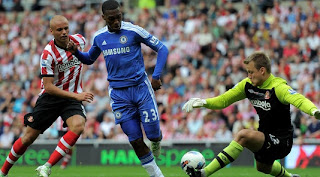 Sunderland face a tough test under Martin O'Neill when they travel to Stamford Bridge to face a Chelsea side striving to get back into the title race. The Blues are currently fourth in the Premier League standings and 11 points adrift of leaders Manchester City, while they are also eight behind Manchester United and Tottenham. The initial focus for Andre Villas-Boas' side may be on putting distance between themselves and Arsenal and Liverpool in the battle for a UEFA Champions League spot, but the manager has not given up hope of challenging for top spot just yet. Following a difficult festive period, Chelsea claimed a battling 2-1 victory over Wolves at the start of 2012 and then beat Portsmouth 4-0 in the third round of the FA Cup last week.

Florent Malouda is doubtful for Chelsea's Barclays Premier League game against Sunderland. The winger picked up a knock in Sunday's FA Cup win over Portsmouth and failed to train on Wednesday or Thursday. Daniel Sturridge and John Terry have both been passed fit but the game comes a week too soon for Michael Essien (knee), Branislav Ivanovic and John Obi Mikel (both hamstring), while Didier Drogba and Salomon Kalou are on African Nations Cup duty.

Sunderland
Nicklas Bendtner could return to the Sunderland squad at the weekend. The Denmark international missed the FA Cup third-round victory over Peterborough because of a knee injury, but is expected to be available for the game at Stamford Bridge. If so, he will be joined in the squad by fellow frontman Fraizer Campbell, who is available for the first time since August 2010 after recovering from a second serious knee problem, but Jack Colback (ankle), Wes Brown (groin) and Titus Bramble (calf/Achilles) remain on the casualty list.

There have been 35 goals netted across the last seven meetings between Chelsea and Sunderland, with at least three goals in each of those games

Referee Phil Dowd has awarded more penalties than any other referee this season (7)
Email ThisBlogThis!Share to TwitterShare to FacebookShare to Pinterest