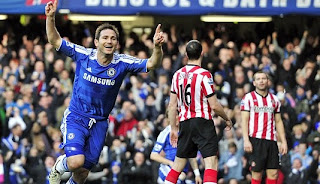 Frank Lampard proved the master of being in the right place at the right time once again as Chelsea survived a second-half scare to beat Sunderland 1-0. Lampard scored for the third successive match since his latest recall, although he knew little about a goal that owed everything to a superb Fernando Torres volley that smashed against the crossbar and back off his team-mate. Torres also saw two strong penalty claims turned down in what was one of his best displays in a Chelsea shirt, Nicklas Bendtner had one rejected at the other end and James McClean missed an open goal that might have snatched a point for the visitors. The watching Gary Cahill would have fancied his chances of breaking into the Chelsea defence as the hosts somehow kept a rare clean sheet.

The Wearsiders were first to threaten, with Stephane Sessegnon running through non-existent tackling before Jose Bosingwa prevented McClean tapping home in the fourth minute. The much-criticised David Luiz was then booked for his latest silly challenge, on Bendtner. Frank Lampard had already seen a shot blocked at the other end and Torres then flicked a header wide at the tip of an unfamiliar 4-1-4-1 formation. And the duo inadvertently combined to give Chelsea a spectacular 13th-minute lead, Torres scissors kick smashing against the crossbar and careering back off Lampard and into the net. Terrible defending from a corner forced Larsson to clear Lampard's hooked volley off the line as the home side held sway. Luiz got a knee in the head from Lee Cattermole after being brought down by David Vaughan and Phil Bardsley blocked another header from Torres, who was being given vocal backing by the Stamford Bridge crowd. But they were almost silenced 10 minutes before half-time when Bendtner dragged Sessegnon's pass inches wide with Petr Cech beaten. Torres did the same at the other end after a neat turn 20 yards out before leaving Matthew Kilgallon in a heap following a seemingly-innocuous aerial challenge. Kilgallon stayed down and was eventually was carried off on a stretcher in stoppage-time, with Michael Turner coming on.

Chelsea had kept only one clean sheet at home in the league all season and Sessegnon fired an early warning shot after the break when he drilled a volley straight at Cech. Simon Mignolet kept out Torres shot from a tight angle, the excellent Juan Mata volleyed the resulting corner over the top and Ramires failed to capitalise when Mignolet spilt Ashley Cole's cross. Torres was convinced he should have had a penalty after going down under John O'Shea's challenge and Bendtner thought the same at the other end seconds later after being bundled over by Cole but referee Phil Dowd disagreed on both counts. He had no hesitation whistling and producing a yellow card when a frustrated Cattermole clattered into Lampard as tempers frayed. Vaughan flashed a 30-yard strike narrowly wide before McClean missed an open goal in the 63rd minute, stabbing wide after a brilliant run and cross from Larsson.

Torres was denied another penalty claim when he was clearly tripped by Bardsley, Dowd rubbing salt into the wound by booking the striker. Luiz produced a vital interception to rob McClean before Sunderland withdrew Vaughan for Craig Gardner. Raul Meireles was soon cautioned for bringing down the new man, who was then joined on the field by the fit-again Michael Essien, who replaced Lampard to make his first appearance of the season. Essien skidded a 30-yard drive wide before Sunderland brought on Connor Wickham for Kieran Richardson. Cole had to be alert to beat Bendtner to a cross as Sunderland poured forward in the final 10 minutes, during which Chelsea introduced Florent Malouda for Mata. Cech got away with flapping at a McClean cross either side of a Meireles chip tipped over by Mignolet and a horrible shank from the same player. Sunderland missed two glorious late chances to equalise, Gardner sidefooting wide after a great Sessegnon run and Bendtner lifting the ball over the bar with only Cech to beat.