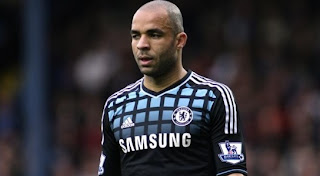 Alex has reportedly snubbed a move to Premier League strugglers Queens Park Rangers. The report claims that the 29-year-old has no intention of swapping Chelsea for the relegation-strugglers while another option would be to move back to Brazil. QPR have offered around £3m for the Brazilian centre-back, but Chelsea are yet to accept the offer with Alex believed to prefer a move to Paris St. Germain, in France, under former-Chelsea manager Carlo Ancelotti. PSG have shown an interest in Alex, but it is believed that Chelsea will not sell the player until they complete the deal to bring in Bolton centre-back Gary Cahill. Chelsea manager Andre Villas-Boas, however, is not willing to let the player leave on a reduced fee, despite his transfer request.
Email ThisBlogThis!Share to TwitterShare to FacebookShare to Pinterest