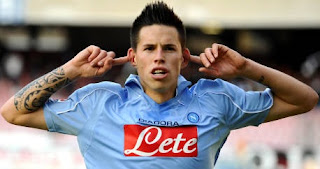 Italian radio are reporting that Chelsea are set to make a move for Napoli play maker Marek Hamsik. Hamsik is one of Europe’s most highly sought after players and it is hardly a secret that Chelsea manager Andre Villas Boas is set on a path of selling the Chelsea old guard and fringe players and bringing in a new generation of Chelsea stars and 24 year old Hamsik certainly fits the bill. Hamsik who cost Napoli just £4.5m in 2007 will face off against Chelsea in the Champions League. But there is one big problem, Napoli will be loathe to sell their star player, no matter the fee offered while-ever they remain contenders in both Serie A and the Champions League. Bottom line is that if Chelsea want Hamsik then they will have to offer a huge fee if they are to have any chance of landing the Slovak International.
Email ThisBlogThis!Share to TwitterShare to FacebookShare to Pinterest