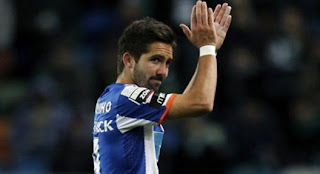 Chelsea are set to make a move for Joao Moutinho. Andre Villas-Boas is eager to find a new midfielder to replace Frank Lampard, who appears to be coming towards the end of his fine spell at Stamford Bridge. It looks as though the Portuguese coach will return to former club Porto in a bid to take Moutinho, who remains under contract at the Estadio Dragao until 2015. The 25-year-old has long been regarded as one of the best midfield players in European football, and Villas-Boas would have to pay at least £20m to lure him to England. The tactician is a fan of Moutinho’s abilities and allowed him nearly 53 appearances when he was in-charge at Estadio do Dragao.
Email ThisBlogThis!Share to TwitterShare to FacebookShare to Pinterest