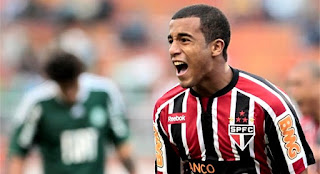 According to reports, Chelsea are on the verge of making a massive £29m bid for Sao Paulo teenager Lucas. The Brazilian international is regarded as one of the best youngsters in the world and Andre Villas-Boas sees him as an ideal alternative to Tottenham’s Luka Modric. Lucas whose performances for Sao Paulo and Brazil has attracted attention from some of Europe’s top clubs has a buyout clause of over £60m written into his contract, but Chelsea are confident of being able to reach a compromise with Sao Paulo, which will see the 19 year old move to West London. Currently contracted to the Brazilian club until the summer of 2015, Lucas has in the past inferred that he wants to continue playing in Brazil until after his country hosts the World Cup in 2014.
Email ThisBlogThis!Share to TwitterShare to FacebookShare to Pinterest