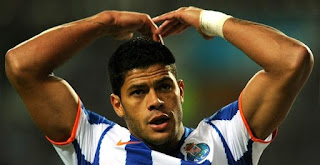 Teodoro Fonseca, the agent of Porto frontman Hulk, has announced that Chelsea are interested in his client but also admitted doubts as to whether the Premiership heavyweights would be able to match an astronomical £84m buy-out clause. The Brazilian 25 year-old has proved to be a prolific performer in Portugal over recent years, scoring 67 goals in 149 games across all competitions since arriving from Japanese outfit Tokyo Verdy in 2008. Such a return has ensured that he is one of the prize assets for his current side, and Chelsea boss Andre Villas-Boas is one man who knows first-hand about Hulk’s talents, having managed him until last summer.

However, speaking yesterday, Fonseca told French paper Le Sport 10 that an imminent move was unlikely. "It is not only PSG that are interested in Hulk but also Inter Milan, Chelsea, Manchester United and Manchester City," he said. "Honestly, I do not think anyone will pay his clause but maybe one day, if he decides to leave the club, then the clause will not be such a big obstacle. In these circumstances he could leave at any time, but now he is happy at Porto. Every day about 30 people ask me about his situation but I just refer them to [Porto president] Pinto da Costa."
Email ThisBlogThis!Share to TwitterShare to FacebookShare to Pinterest