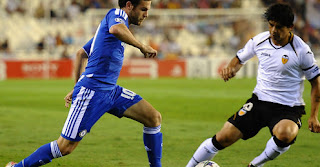 Andre Villas-Boas faces the first major test of his Stamford Bridge reign with his team's do-or-die Champions League clash precariously balanced against Valencia tomorrow. A 1-1 draw at Belgian side Racing Genk and 2-1 defeat at Bayer Leverkusen have undermined Chelsea's challenge, but they will reach the last 16 for a ninth successive season by beating Valencia in their final Group E match or a eking out a goalless draw. While Chelsea were winning at Newcastle, Valencia scraped a 2-1 home win over Espanyol in La Liga to maintain their grip on third place but coach Unai Emery had to abandon plans to rest Roberto Soldado, bringing his captain off the bench to score the 80th-minute winner.

Chelsea
After being lucky not to be sent off within five minutes and otherwise enduring a difficult afternoon against Newcastle on Saturday, David Luiz may be considered too big a risk to play by Chelsea boss Andre Villas-Boas, with Jose Bosingwa the likeliest addition and Branislav Ivanovic moving into the center of defense. Fernando Torres is almost sure to be on the bench once more with Didier Drogba continuing in the central striking role, with no new injury worries to report for the hosts.

Valencia
The Spamiards are facing a number of injury problems, however, and Unai Emery has some difficult decisions to make. Hedwiges Maduro and Sergio Canales are out with long-term injuries, while Ricardo Costa, Victor Ruiz and Ever Banega are all questionable. None of the three made Valencia's 18-man squad in their 2-1 La Liga win over Espanyol on the weekend.

Chelsea have never lost a Champions League game against Valencia, but have won only two of these encounters (three draws)

Valencia have won none of their last seven Champions League matches against English clubs (D4, L3)

No side have attempted more shots on target than Chelsea (48) in the Champions League so far this season
Email ThisBlogThis!Share to TwitterShare to FacebookShare to Pinterest