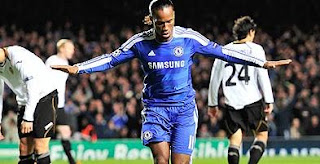 If there was ever a time to silence the critics, last night's Champions League encounter at Stamford Bridge was very much the opportunity. The press have had their collective daggers drawn for Andre Villas-Boas - and perhaps rightly so, given recent results in the Carling Cup, Europe and Premier League - but it was the Portuguese who had the last laugh as he masterminded the destruction of Valencia to win the Group and progress to the last 16 of the competition. With fantastic performances from Didier Drogba, Ramires, David Luiz and Juan Mata (again), the Spaniards were brushed aside with consummate ease. Two goals from the big Ivorian and a wonderful finish by Ramires made it 3-0 to the Blues.

Chelsea started brightly, as Raúl Meireles tested Diego Alves in the opening minute. It was not long before Villas-Boas' side took the lead. A lofted cross into the penalty area found Juan Mata who capitalized on the slip of Antonio Barragán, took the ball down superbly, before cutting it back to Didier Drogba who fired into the net low and hard. That goal though, wasn’t so significant, as Valencia still only had to level and they were heading through. The Spaniards kept the ball well, but Chelsea were more than happy to let them as they were instructed to remain deep. It worked too, and despite the flashes from Sofiane Feghouli, there was little concern from the English side as Valencia’s players ran into a blue wall time and time again; David Albelda’s long range drive didn’t register.

With that, the hosts countered each time with pace and purpose. Valencia were stretched, and chasing the game. Drogba was dominating too, dropping deep to pull Víctor Ruiz and Adil Rami out of position with some neat work bringing others into play and hurting the centre-backs himself. It was no surprise then what the Ivorian did next, as he pulled away from Tino Costa and ran at the visitors defence, before slipping in Ramires who managed to get round Ruiz, trying to be too clever. The Brazilian finished easily, and Chelsea had Valencia exactly where they wanted. 2-0 and Villas-Boas was jubilant on the touchline. Valencia tried to come again, but Chelsea closed down the gaps between defence and midfield, with Oriol Romeu breaking up any passages of play. The La Masia graduate is growing fast in England. Meanwhile Daniel Sturridge had an effort go into the side netting, after another breakaway.

After half-time the visiting fans turned the volume up, and their players cranked up the pressure too. Still though, Chelsea stood strong, never faltering, and eradicating any sniff of danger. Emery was growing more agitated on the touchline too, he wanted to be out there, but instead he made several changes which didn’t come to fruition. Jonas had been anonymous, and same went for Roberto Soldado. Tino Costa was stifled and the left side tandem of Jérémy Mathieu and Jordi Alba never got going. Emery’s opposite number meanwhile was winning the tactical battle with ease, silencing the doubters who have targeted his team. Chelsea supporters still a little edgy in the final stages, Ramires and Sturridge wasted chances to kill the game. It was again to be Drogba who would step up. Romeu broke play up in the middle, and fed Mata, who in turn slipped in the striker who bagged his second. The movement, skill and pass from Mata had been seen before – at Mestalla. A bitter pill to swallow for the visiting fans, and those watching back home. Their side were now nothing but dust, and will play in the Europa League.