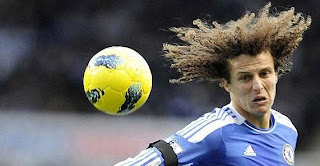 David Luiz has been described as many things since he joined Chelsea, from flamboyant Brazilian to Sideshow Bob. His growing army of critics prefer to talk about his defending ability as worthy of appearing in a cartoon. However, tonight's Champions League match against Valencia is certainly no laughing matter and Chelsea need a serious performance from the centre-half more than ever. Given the way Chelsea and Luiz, in particular, have struggled to keep opponents quiet all season, the odds on the home side getting the clean sheet they require at Stamford Bridge aren't too good, especially as Valencia come into the match having won seven of their previous eight matches.

Despite all the negative comments aimed at the Brazil international, Andre Villas-Boas is keeping faith with him. It has certainly not been dull at Chelsea since the 24-year-old arrived from Benfica. His talent on the ball has never been in question yet the same can't be said of his positional sense and timing of tackles. There has been little sign of improvement in this regard during the calendar year with Luiz conceding soft penalties against Fulham, Birmingham and Queens Park Rangers. Against Newcastle on Saturday he was fortunate not to be sent off for a professional foul after just four minutes. Chelsea's opponents know he is a weak link and have been noticeably targeting his area of the pitch - there can be no doubt Valencia will do the same tonight.