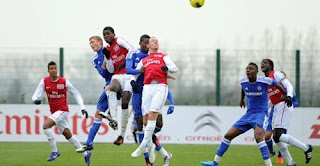 Chelsea's reserves completed a stunning away victory at Arsenal on this afternoon, led by two-goal captain Nathaniel Chalobah. The versatile youngster, playing in deep midfield, netted a clever back-heel to open the scoring seven minutes before half-time, adding a third from a sumptuous free-kick after Romelu Lukaku had clipped home a second goal five minutes into the second period. Lucas Piazon completed the goalscoring shortly before full-time with a cute solo effort, twisting and turning inside the area before firing home. The win takes us above the Gunners in the Premier Reserve League South table.