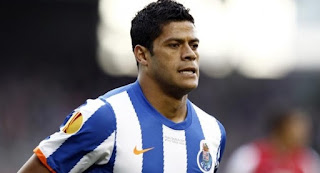 FC Porto striker Hulk would again love to work with Chelsea boss Andre Villas-Boas according to his agent. The 25-year old Brazilian is being heavily linked with a future move to Stamford Bridge and his representative, Theodoro Fonseca, has added fuel to the fire by saying his client wants to play under Villas-Boas again. "In all transfer windows there are polls and contacts with several clubs," he admitted. "Andre Villas-Boas knows him very well and they have a very good relationship. Hulk loves Andre and he would love to work with him at Chelsea or with any other team because he likes the way he coaches. In football everything is possible, but his buy-out clause is very expensive, so his future will depend on the agreement between the two clubs."
Email ThisBlogThis!Share to TwitterShare to FacebookShare to Pinterest