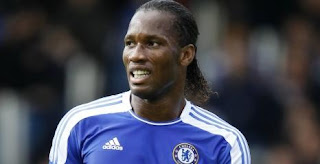 Juventus will battle it out with Anzhi for the signing of Didier Drogba next summer. Drogba, 33, struck twice to make it 31 goals in Europe for Chelsea as they beat Valencia 3-0 last week to book their last 16 place. The Ivory Coast striker’s Blues future remains in doubt, with his contract up at the end of the season. Juventus are willing to offer Drogba £5m a year, however they face tough competition from Russian club Anzhi Makhachkala. Drogba has endured a stop-start season with injury and had scored only once this term before his double against the Spaniards on last Tuesday at Stamford Bridge. He said: “The injuries did not help, the knock on the head, the surgery on my arm and then the red card against QPR. I’m not 100 per cent fit yet, but it is going to come back and so are the goals.”
Email ThisBlogThis!Share to TwitterShare to FacebookShare to Pinterest