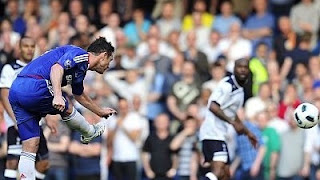 The days when Chelsea took to calling White Hart Lane 'Three Point Lane' following an extraordinary run of results against Tottenham are all but gone... It is six years since the Blues won at Spurs' ground in the league and, given the two sides' respective displays so far this season, Harry Redknapp's team will go into the match on Thursday as favourites. Every step forward that Andre Villas-Boas takes in the early stages of his managerial career at Chelsea seems to be followed by one back. Lose at Tottenham and any dreams of handing demanding owner Roman Abramovich the title in his first season at Stamford Bridge will seemingly be all but gone.

Tottenham Hotspur
Harry Redknapp says winger Gareth Bale is "very doubtful" for Thursday's London derby due to an ankle injury. Aaron Lennon is out with a hamstring injury, Ledley King's chronic knee injury means he is unlikely to step out against the Blues after playing against Sunderland at the weekend, and Jermain Defoe is a doubt due to a hamstring problem. Younes Kaboul returns from suspension, Emmanuel Adebayor has a minor foot injury but should play, while long-term absentees Tom Huddlestone (ankle) and Michael Dawson (Achilles) remain sidelined.

Chelsea
John Terry is fit and will start the match at Tottenham, despite being charged with racially abusing Anton Ferdinand. Terry, who categorically denies the allegation, has shaken off the Achilles tweak he suffered during open training on Monday and will lead out the side at White Hart Lane. Ramires has recovered from a leg injury but defender David Luiz is still out with a knee problem, joining long-term injury victim Michael Essien on the sidelines

After winning none of the previous 17 league games against Chelsea at home (D6 L11), Spurs are unbeaten in the last five (W3 D2)

In his last seven league appearances against Spurs, Didier Drogba has alternated between scoring and not finding the net. Having not made the scoresheet last time out, he is due a goal if that run continues

A draw in this game ensures that Tottenham will be the top London club at Christmas for the first time since 1995-96, when they were fourth behind Newcastle, Man Utd & Liverpool)

Tottenham are the only team with a 100% record in London derbies this season, while Chelsea are the only capital club yet to pick up a point in a local derby

Since the start of 2009-10, Tottenham have taken more points in London derbies than any other side, 37, one more than Chelsea
Email ThisBlogThis!Share to TwitterShare to FacebookShare to Pinterest