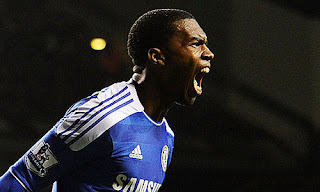 It was a performance in two acts at White Hart Lane last night. The first, launched by Tottenham, lasted about twenty minutes; the second - heavily dominated by Chelsea - lasted the remainng 70. Spurs started at break-neck speed, taking the lead through Emmanuel Adebayor's tap-in, but they soon faded and the Blues equalised with Daniel Sturridge's 10th of the campaign. John Terry endured a barracking from the Tottenham supporters as the battle for supremacy in the capital ended in a 1-1 draw. The result means Spurs remain two points ahead of Chelsea having played one match more.

With barely a minute gone, the winger burst past two defenders before seeing his shot blocked by Ashley Cole. Tottenham maintained a relentless tempo in the opening stages and took the lead after seven minutes. Sandro put in a crunching tackle to dispossess Sturridge on the halfway line and the Brazilian released Bale down the left. The winger flew past Jose Bosingwa before crossing to Adebayor, who had peeled off Terry to nip in between the defender and Petr Cech to tap home unmarked. Villas-Boas cut a worried figure, crouching and fretting on the touchline as Spurs pushed for a second. Ivanovic was booked for a desperate push on Bale on the edge of the box before Adebayor joined him in the book for an innocuous late challenge on Raul Meireles. Spurs failed to add a second despite their early dominance, however, and the once raucous atmosphere inside White Hart Lane went flat.

Chelsea found their rhythm and equalised in the 23rd minute. Rafael van der Vaart's slide caused the ball to ricochet off Ashley Cole's hand down the Chelsea left. The ball fell back in to the path of the full-back and he crossed for Sturridge, who stabbed home after giving Ledley King the slip at the back post. Despite the now incessant chanting aimed his way, Terry, and Chelsea, grew in confidence. The defender snatched the ball off Adebayor in a dangerous position before cutting out Modric's cross-field ball with a lion-hearted diving header. Jose Bosingwa then sent over an inch-perfect cross that flew over Kyle Walker, Drogba chested the ball down and rattled the woodwork with a fierce half-volley as Chelsea started to take a grip on the game. Villas-Boas was forced in to a change just after the half hour when Branislav Ivanovic came off with an injury and he made way for Paulo Ferreira, who came on for his first league appearance of the season. Just before half-time Ramires went into the book for a dangerous two-footed tackle on Bale, who went down clutching his ankle, but he picked himself up and carried on. Chelsea's injury worries deepened when John Obi Mikel limped off moments later with a groin problem and he was replaced by Oriol Romeu.

Drogba played in Ramires in the early stages of the second half but Friedel put in a crucial stop with his legs before Terry sent a powerful header in to the American's arms. Tottenham had the ball in the net just before the hour when Adebayor chested the ball past Cech from a Modric free-kick, but the linesman flagged for offside. Chelsea thought they should have had a penalty when the ball struck Benoit Assou-Ekotto's hand in the box but referee Howard Webb waved play on. Juan Mata had a strike ruled out for offside and Adebayor was lucky not to receive a second booking for hacking Terry down. Villas-Boas looked to freshen his attack up by bringing on Fernando Torres for Drogba, but it was Tottenham who suddenly looked the more dangerous side.

Cech did well to tip over Sandro's looping shot which had taken a deflection off Meireles before Gallas poked wide from the resulting corner when free in the box. Chelsea recovered and darted up the other end and won a free-kick. Mata delivered an inch-perfect ball to find the unmarked Ramires but he inexplicably headed wide from eight yards. At the other end, Bale left four Chelsea defenders in his wake before finding Adebayor unmarked at the back post. The former Arsenal man wasted his golden opportunity by dribbling a weak shot wide. King fired at Cech in injury time as Spurs aimed to snatch a winner, but it did not come and the final whistle arrived, closely followed by a homage from Terry to the travelling fans in the far corner.