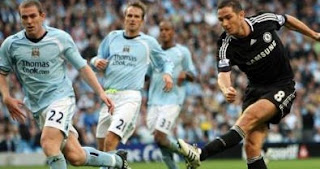 With Andre Villas-Boas’ side already ten points behind the league leaders, a defeat would effectively end their title hopes. Having already destroyed Manchester United 6-1 at Old Trafford and put five past third-placed Spurs at the beginning of August, it is difficult to see who could stop City cruising to the title if Chelsea cannot get a result at the Bridge. Despite a poor run during October and November that saw defeats away to Liverpool, QPR and a 5-3 defeat home against Arsenal, Chelsea have turned their performances round of late with a win at St James’ Park, home to Wolves and a 3-0 win against Valencia to finish top of their group the Champions League.

Man City have been devastating in the league this year, winning twelve of their 14 games and are still unbeaten. Their phenomenal goal difference of +35 is far superior to Manchester United’s in second place, scoring 4 or more goals on seven separate occasions. Despite their dominant league form, they could only finish in third place in their Champions League group and drop into the Europa League. For a team that has spent over £450m since 2008 and, as such, has high expectations, such a disappointment could well play on the players' minds in Monday’s game.

Chelsea
The Blues will be without the suspended David Luiz. Defender Luiz picked up his fifth domestic yellow card of the season in Saturday's 3-0 win at Newcastle and serves a one-match ban. Right-back Jose Bosingwa has therefore made a timely recovery from the adductor strain that caused him to miss Tuesday's Champions League success against Valencia. Josh McEachran is back in training after an ankle knock while fellow midfielder Michael Essien is expected to return from knee surgery early next year.

Manchester City
Right-back Micah Richards looks set to miss out. Richards was ruled out of Wednesday's Champions League win over Bayern Munich with a calf injury and may not shake off the problem in time. Central defender Stefan Savic played in his position in midweek but Pablo Zabaleta is now fit and could slot back in. Left-back Aleksandar Kolarov (groin) remains out.

The Blues have scored in their last 14 Premier League home games and scored more than once in 10 of the last 11, but the clean sheet against Wolves ended a run of eight without a shut out on home soil.

In the last 13 Premier League meetings with Chelsea, the Citizens have failed to score in nine.

City have failed to score in eight of their last nine league visits to Stamford Bridge.

Man City have made the best ever start to a Premier League season with 38 points from their opening 14 matches.