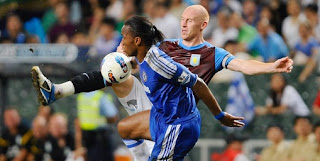 If one thing can be guaranteed when these sides clash at Stamford Bridge it is excitement, as the last four matches have produced 24 goals. Not many sides can say they have scored three and four times in a Premier League match at the home of the Blues. Aston Villa have in the last couple of seasons but remarkably they have not managed to end up on the winning side once, drawing 3-3 and 4-4 and also being on the end of a 7-1 hammering in between. But a home win has now become a must for Chelsea, on the back of three score draws, or any hope of a serious title challenge will all but disappear.

Chelsea
Ramires returns from suspension for Chelsea. Manager Andre Villas-Boas must decide whether to recall the Brazilian following his one-match ban or stick with his midfield of Frank Lampard, Raul Meireles and Oriol Romeu. Defenders John Terry and Jose Bosingwa have shaken off knocks picked up in the Boxing Day draw against Fulhambut Branislav Ivanovic and John Obi Mikel (both hamstring) remain out.

Aston Villa
Record signing Darren Bent ahould be available after a three-game absence with a thigh problem. Bent will be included in the squad if he comes through Friday's training session unscathed but fellow striker Emile Heskey is ruled out with an Achilles problem. Right-back Alan Hutton returns after serving a one-game ban for his sending off against Arsenal but faces a fight for his spot after Carlos Cuellar's recent impressive form.

Farnando Torres has fired in just 13 shots on target for Chelsea in 2011, just two more than he managed in 2011 for Liverpool.

Villa have won none of their last nine visits to Stamford Bridge in the Premier League (W0 D3 L6).

There have been six penalties awarded in the last four meetings between Chelsea and Aston Villa at Stamford Bridge.

Villa have conceded the highest percentage of goals from set pieces in the Premier League (57%).