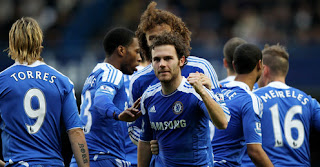 The Blues dropped more points at Stamford Bridge: proving the ground's anything but a sanctuary for Chelsea as their Barclays Premier League title hopes suffered another mortal blow following a 1-1 draw with Fulham in the west London derby. A game manager Andre Villas-Boas had hand picked for Fernando Torres to rebuild his shattered confidence proved another nightmare outing for the £50million man. This was also meant to be the match where Chelsea got their championship challenge back on track after two straight 1-1 draws away from home.

Torres, making his first league start for almost two months, did inadvertently lay on Juan Mata's 47th-minute opener but Clint Dempsey equalised nine minutes later before Fulham goalkeeper David Stockdale kept Chelsea at bay. Torres, whose current goal drought stretched back nine matches, had been hoping for a Boxing Day gift from a side that shipped five against Manchester United on Wednesday and who were without the injured Bobby Zamora and Andy Johnson. Fulham looked determined to spoil all that, Dempsey going a little far with a cynical tug on Raul Meireles that saw the American booked. Otherwise, they were the better side for 15 minutes, with Dempsey's bouncing 25-yard shot forcing an uncomfortable save from Petr Cech and Orlando Sa seeing an effort blocked by David Luiz before wasting a great chance when he headed Stephen Kelly's cross over the bar.

Torres, who had already had half a sniff, was unlucky not to give Chelsea the lead when he expertly controlled Mata's cross on his chest but smashed his volley straight at Stockdale. Torres then robbed Brede Hangeland on the edge of the box and laid off to Daniel Sturridge to slice off target but Fulham settled down again and Mousa Dembele dragged wide after bypassing Oriol Romeu. Although Jose Bosingwa sent in some dangerous crosses, Chelsea were struggling to produce a telling ball against what was at times a nine-man defence, with Raul Meireles and Romeu resorting to wayward pot-shots. The stalemate continued until two minutes before the break when Dembele sent a tame header too close to Cech.

Torres' travails looked to have continued after the restart but the striker helped the Blues break the deadlock inside two minutes. The Spaniard failed to control Ashley Cole's cross but the ball fell perfectly for Mata to sweep home left footed from the edge of the box. Fulham had only scored four league goals away from home all season, the worst record in the top flight but they were soon level with a superbly-worked goal. The ball eventually found its way to Bryan Ruiz on the right, who tricked his way past Cole and crossed for Dempsey to stab past Cech. Villas-Boas took action just past the hour mark, hauling off Frank Lampard for Florent Malouda. The change almost paid off when the Frenchman's backheel from Terry's header hit the feet of Stockdale and bounced back off Malouda for a goalkick. That came after the goalkeeper tipped over Sturridge's curler and before Bosingwa was cautioned for felling Kerim Frei.

Villas-Boas then threw on Didier Drogba for Sturridge. Drogba failed to beat Stockdale from a tight angle after gathering a terrific long ball from Luiz and Meireles curled a superb shot on the turn just past the post. A masked Paulo Ferreira replaced Bosingwa in Chelsea's final change, Fulham responding by sending on Pajtim Kasami for Sa. Stockdale twice denied Chelsea a late winner, tipping Meireles' header from Malouda's cross over the bar, before palming away Drogba's glance from a corner. The keeper nearly spilt Malouda's long-range drive and Chelsea almost paid the ultimate price when Kasami shot tamely at Cech before Stockdale's fingertips again denied them from Drogba's stoppage-time free-kick.