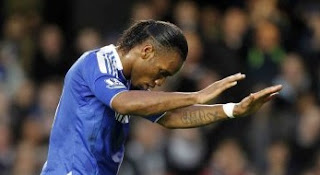 Chelsea's habit of conceding late goals returned to haunt them again as a 3-1 defeat to Aston Villa saw them suffer the worst possible end to 2011. The signing of Gary Cahill cannot come quickly enough on the evidence of the final 10 minutes today, which saw Villa exploit some horrible defending to snatch an unlikely victory, much as Arsenal and Liverpool had done earlier in the season. Stiliyan Petrov and substitute Darren Bent both scored in the final seven minutes, putting another nail in the Barclays Premier League title hopes of the Blues, who have now taken just three of the last 12 points on offer and have dropped out of the top four.

Chelsea had been boosted before kick-off by the news of Manchester United's shock home defeat to Blackburn as they sought to end a run of three straight draws and keep their fading championship hopes alive. They were immediately on the attack and James Collins stopped Juan Mata testing Brad Guzan from close range. But the hosts were soon grateful themselves when David Luiz did enough to prevent Gabriel Agbonlahor getting a clean header on Marc Albrighton's cross. Both sides began giving the ball away before Ireland wasted a great chance to slide in Albrighton, with Villa belying their recent run of one win in seven. But they shot themselves in the foot in the 22nd minute when Richard Dunne lunged in on Drogba and referee Mark Halsey awarded a penalty. Drogba stepped up to score straight down the middle, going level on 150 Chelsea goals with Roy Bentley and Peter Osgood, who is buried under the Shed End penalty spot.

But as against Fulham on Boxing Day, the Blues conceded less than 10 minutes after taking the lead. Charles N'Zogbia got to the byline and cut the ball back for Ireland, whose shot was blocked on the line by John Terry - possibly by a hand - straight back to the midfielder, who slotted home his first goal for Villa and first for more than two years. It was the perfect response by the midfielder to his Twitter troubles after manager Alex McLeish admonished him for being pictured apparently smoking a Shisha pipe. Terry was then booked for clattering into Agbonlahor on the halfway line before Stephen Warnock threw himself forward to block Mata's shot.

Chelsea started the second half as they did the first, Daniel Sturridge close to connecting with Mata's low cross. But Villa remained a threat and Collins almost inadvertently bundled home N'Zogbia's free-kick before Agbonlahor missed a glorious 53rd minute chance on the break. The visitors burst forward after a Chelsea attack, perfectly exploiting a three-on-one to release Agbonlahor, whose finish was too close to Petr Cech. Villas-Boas threw on the axed Frank Lampard for Oriol Romeu four minutes later, moments before Agbonlahor dragged another chance wide. Mata almost conjured up a chance for Sturridge with some magical wing play, with the latter immediately replaced by Fernando Torres. The Spaniard, who had also been dropped, was desperately unlucky not to make an instant impact, crashing a 30-yard shot against the crossbar - possibly via a deflection. Ashley Cole had a handball appeal against Dunne waved away by Halsey, who did then book Carlos Cuellar for a robust tackle on Drogba. There was some light relief when a fan invaded the pitch and proceeded to hug Terry before being ejected as Chelsea poured forward. Drogba fired Torres' through ball wide, with Jose Bosingwa then replacing Paulo Ferreira for the final 15 minutes, the substitute immediately testing Guzan from 25 yards.

Villa sent on Bent and Gary Gardner for N'Zogbia and Albrighton but remained on the back foot until dramatically taking the lead seven minutes from time. Ciaran Clark was allowed to carry the ball forward and Petrov ran into what was mammoth gap between Terry and Luiz to clip the ball over Cech. Petrov limped off injured with Barry Bannan coming on and it was game over three minutes later, Lampard's pass intercepted by Ireland, who burst forward and squared for Bent to beat the onrushing Cech. Chelsea were jeered off by their own fans, who will be hoping for much better in 2012.