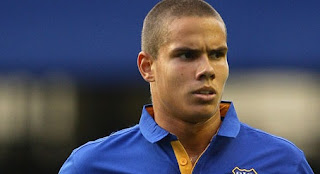 Chelsea are believed to be lining up a bid for Everton's Jack Rodwell in the January transfer window. Everton are yet to receive an offer for the highly-rated midfielder, but there is firm interest from Chelsea, with Andre Villas-Boas looking to inject more youth into his ageing squad. Sir Alex Ferguson has been a long-term admirer of the youngster, but Chelsea are ready to test David Moyes' resolve over the player valued at £20m. With Frank Lampard no longer guaranteed a place in Chelsea's starting XI and Michael Essien a long-term injury casualty, Rodwell looks a likely successor, and would be eligible to play in this season's Champions League when it resumes in February. Moyes has already warned potential suitors that Everton will not sell any player on the cheap, and with Rodwell tipped to be heading to Euro 2012 with England, his value could increase dramatically in the summer.
Email ThisBlogThis!Share to TwitterShare to FacebookShare to Pinterest