Chelsea on alert as Pato could be sold next month 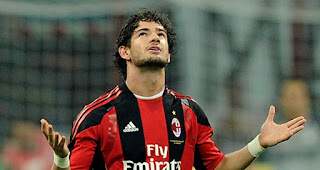 Chelsea and Manchester City have been put on alert after AC Milan striker Alexandre Pato hinted at a bust-up with coach Massimiliano Allegri. Pato, who earlier this season had already been warned by Allegri that he is no longer an automatic pick in the Milan starting line-up, has been linked with a move to the Premier League throughout the year. Reports in both England and Italy have suggested that both Chelsea and Man City are keen on the Brazil international, although Milan have insisted that the 22-year-old will not join City as part of a deal for Carlos Tevez. The Blues, who will next week lose Nicolas Anelka, are also keen on Edinson Cavani, but Pato would likely be a cheaper option given that Napoli want around £50m for the Uruguay international.
Email ThisBlogThis!Share to TwitterShare to FacebookShare to Pinterest