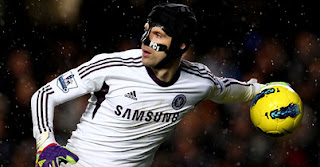 Petr Cech believes Chelsea's 2-1 victory over Manchester City on Monday has thrown the Premier League title race wide open, with the Blues back in the hunt. Now Chelsea, Manchester United and Tottenham will all believe that they can overhaul City at the top of the table, with Cech of the opinion that the Blues had to win on Monday to keep themselves in the running. "We have cut the gap on City down to seven points, so we are back in the title race," the Czech keeper wrote on his personal website. "We are five points behind United and I think we have put some pressure on both Manchester clubs. It was an extremely important match for us and we needed to win it. Let's wait and see how a first defeat of the season impacts them."
Email ThisBlogThis!Share to TwitterShare to FacebookShare to Pinterest