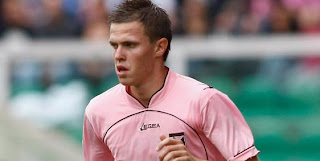 Chelsea are becoming very keen on signing Palermo playmaker Josip Ilicic, as reported here last week. The 23-year-old midfielder has been in great form for the Serie A side this year and has caught the eye of a number of top European clubs over the past twelve months. Earlier this year, Liverpool and Tottenham were both linked with the former Maribor player, who has broken into the Slovenia national team over the past year and has also been monitored by several Spanish sides. But according to fresh reports, both Chelsea and Inter Milan are keen on the midfielder, who Palermo value at around £25m. And Chelsea appear to be stepping up their interest in Ilicic, sending scouts to watch him impress in the 2-0 win over Fiorentina last weekend. His agent, Armir Ruznic, last Spring hinted that a move to the Premier League could happen next year.
Email ThisBlogThis!Share to TwitterShare to FacebookShare to Pinterest