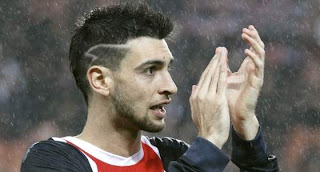 Chelsea have been put on alert after Paris St Germain's Javier Pastore admitted he wants to sign for a bigger club. The former Palermo playmaker was tracked by  the Blues last summer before making the switch from Serie A to the ambitious French outfit. Patore has scored six goals in 15 appearances so far this term, but the 22-year-old has admitted it would be hard to refuse if the advances of a bigger club. He told Radio Radio: "I train with great conviction in order to realise my dream of playing with a big team. If I want a team bigger than PSG to contact me, then it depends on me." Chelsea could switch their focus to Pastore next year after failing to lure Luka Modric from Tottenham.
Email ThisBlogThis!Share to TwitterShare to FacebookShare to Pinterest