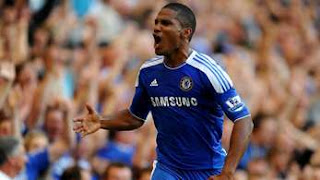 Midfielder Florent Malouda is the latest high-profile name to appear on Russian club Anzhi's transfer wish-list, according to TalkSPORT. The Russian top-flight club were interested in signing Nicolas Anelka before he joined Shanghai Shenhua - but they have now turned their attention to his former team-mate and are ready to offer the France forward £6m-a-year. That figure could even rise if Malouda enters into negotiations with the club, as he is thought to be unhappy with being a bit-part player at Stamford Bridge. Brazilian clubs Corinthians and Flamengo are both interested in the 31-year-old but they would struggle to match Anzhi's financial offer.
Email ThisBlogThis!Share to TwitterShare to FacebookShare to Pinterest