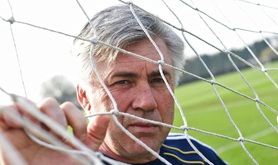 Carlo Ancelotti is expected to raid his former club for new signings as he takes over at PSG. The Italian coach, who has been out of work since leaving Chelsea in May, is expected to fly out to the Middle East on Sunday to join PSG's winter camp in Dubai, which finishes with a friendly against another of his former clubs, AC Milan, on January 4. By then, Ancelotti will hope to have tied up a deal for Brazilian defender Alex, on the transfer list and banned from the training ground at Chelsea after falling out of favour with manager Andre Villas-Boas. Alex has made just three Barclays Premier League appearances this season. Ancelotti's move has also sparked speculation that Didier Drogba and Florent Malouda could follow Alex to Paris, while the 52-year-old has also been linked with moves for his old Milan stars Alexandre Pato and Kaka, who is now at Real Madrid.
Email ThisBlogThis!Share to TwitterShare to FacebookShare to Pinterest