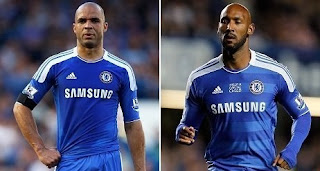 Andre Villas-Boas confirmed that the club has accepted transfer requests from Alex and Nicolas Anelka. The pair were missing from the squad for yesterday's 3-0 victory at Newcastle United. Villa-Boas confirmed after the final whistle that transfer requests had been received and accepted, and that Brazilian defender Alex and French striker Anelka are no longer training with the first team. Villas-Boas said: "The conversation was fair and very, very frontal and direct with the players. The players have shown their interest in leaving the club, they have put in transfer requests for quite some time."

The Portuguese continued, "They are top, top professionals - their professionalism and integrity is never in question - but at this moment and with the recent form and results, we have decided just to try to get the group together, and we have decided to assign different training times for Anelka and Alex. Again, it was a frontal and direct conversation, the players were fantastic in assuming it. The group was informed and they took on board the decision. The transfer request was accepted - it doesn't mean that it will happen, and if it doesn't happen, the players will return to full training."

Both men played in Tuesday night's 2-0 League Cup quarter-final defeat by Liverpool at Stamford Bridge, a game which could yet prove to be their final appearances for the club. Alex, 29, joined Chelsea from PSV Eindhoven in July 2004, while 32-year-old Anelka arrived in London after completing a £15 million switch from Bolton Wanderers in January 2008.