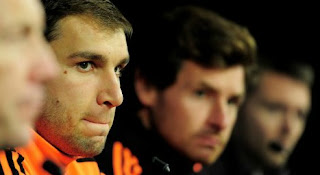 Manager Andre Villas-Boas denied media reports he gave his team a dressing down and ordered extra training the day after the Arsenal match. "There was no kind of rant and no extra work - it was a conversation between people," said the Portuguese. "It is not my leadership style to shout and my management is always two-way management. The players are encouraged to give their opinion because they are the ones that take their talent on to the pitch." Speaking of the way goals were conceded he added, "I don't think it has something do with balls played in behind and balls played deep. There were quick counter-attacks and goals suffered in little defensive blocks and it has nothing to do with playing a high line or not. It is our philosophy and we will focus on getting it right."

Villas-Boas acknowledged it had been a particularly difficult week. "Our progress was stopped disastrously with two defeats in the league but it doesn't mean our philosophy is wrong and we are not on the right track," he said. "It doesn't mean our castle fell down but we have to recover. There is no running away from our responsibilities ... we know things are not right when you concede five goals at home and we have to address that."

Defender Branislav Ivanovic said the Chelsea players were still fuming about their performance against Arsenal. "The whole team is angry and we have to show the reaction and our character, to change things," said the 27-year-old Serbian international. "It was a big derby and when you lose you cannot be happy. As a defender I can never be happy with conceding five goals. The good part is we know where we made mistakes and we can try everything to make sure it does not happen again. Every one of us has to look in the mirror, to be honest with how we played defensively," added Ivanovic.