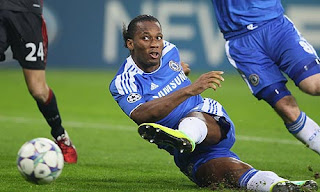 Chelsea travelled to Germany to take on Bayer Leverkusen in the UEFA Champions League, in a game, which was turning out to be a must win for the Blues, in order for them to ensure their survival in the competition. However, given the hundred percent home record that Leverkusen had established in the tournament, it was going to be a tough task for the Blues to break down the Germans. Especially given the fact that their domestic form was no where the level that it should have been at. Chelsea were also set to face off against their former midfielder Michael Ballack. Despite scoring the opening goal, the Blues couldn’t contain the home side, who went on to sneak in a very late goal, which saw them win by two goals to one and top the group.

The match kicked off with both the teams cancelling each other out and not looking to cause any threats to each other. However, as the match progressed, both the teams slowly started to pick up the pace as they started to create a number of chances. In the 33rd minute, Castro whipped in a corner which was met by Ballack. The midfielder sent his effort towards the goal, but saw it crash off the crossbar. Friedrich tried to connect with the loose ball, but after raising his boot to a dangerously high level, the referee ended up awarding a free kick in Chelsea’s favour. The Blues went on to dart forward, as they looked to attack the home side. Sturridge, went on to play Drogba on with a brilliant pass and saw the striker sweep in past the Leverkusen defenders. However, despite beating Leno to the ball, the striker was denied a straight site of goal, as he was sent wide. The forward then went on to strike from a narrow angle and his effort ended up sailing well over the bar. As the match progressed the two forwards continued to combine brilliantly and, as half time approached, they played some slick passes between the both of them. Drogba then went on to play Juan Mata on with a brilliant through ball, but the Spanish international could only manage to shoot his effort towards Leno, who made a simple save. Heading into the tunnel, Andre Villas-Boas seemed to be the manager with the most pressure on his shoulders, as he needed to produce a positive result in the game, considering the poor slump of form Chelsea found themselves in. 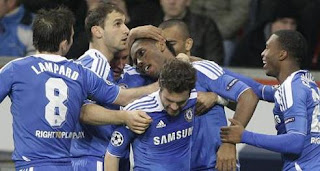 Following the break, Chelsea seemed to come out of the tunnel with a plan and imposed it almost immediately after the whistle. After just threeminutes, Sturridge played a brilliant ball towards Drogba from the right side of the pitch. The forward then controlled the ball and protected it from two defenders, before turning and smacking it into the back of the net. One nil. Ten minutes later, Cech showed glimpses of his former self, as he denied Ballack twice within the span of a minute. The keeper first went on to tip an overhead kick from the midfielder, as he knocked the ball behind for a corner. He then went on to deny the resulting corner from converting into a goal, as he leaped brilliantly to knock the ball away. In the 63rd minute, Sturridge made a run forward and got in a one on one situation with the keeper. However, despite aiming his effort below the keeper, Leno managed to drop down in time to deny the forward from scoring Chelsea’s second.

Leverkusen soon started to pick up a rhythm of their own and managed to score an equalizing goal mid way through the half. Castro whipped in a diagonal pass, but missed his initial target. However, the ball managed to roll towards Sam, who crossed the ball beyond the Chelsea defenders. Derdiyok then managed to react the quickest, as he smacked the ball past Cech and into the back of the net. In the closing stages, Ivanovic went on to find Malouda with a brilliant pass. The Frenchman then went on to lob the ball towards Dorgba, who went on to smack the ball on the volley. Despite hitting the ball with pace and power, his effort sailed just wide of the mark. The miss from Drogba came back to haunt the Blues in stoppage time, as Leverkusen snuck in a very late winning goal. Castro whipped in a corner in stoppage time and Manuel Friedrich went on to connect with the ball, sending it into the back of the net. Game over.

Leverkusen now top the group, with Chelsea and Valencia sharing the spoils for second place. One game remains - and it's the Spanish side that visit London in two weeks...