Roll up, roll up... now it's Kaka heading to Chelsea! 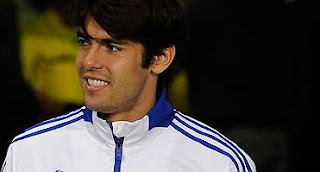 Former Ballon d'Or winner Kaka has struggled to assert himself at Real Madrid since his colossal £54m move from Milan in 2009 - the consequence of both injuries and Cristiano Ronaldo's towering presence. Despite pledging his future to Real, Kaka is 29 and at risk of wasting his best years on the bench in Madrid. Real think they can recoup around £30m for him and have sounded out Chelsea regarding a possible deal. Although Chelsea are looking to reduce their average age, it looks on the surface like a brilliant move if they can pull it off. Kaka is strong and quick enough to thrive in the Premier League, and would bring much needed creativity and firepower to an ailing Chelsea midfield.