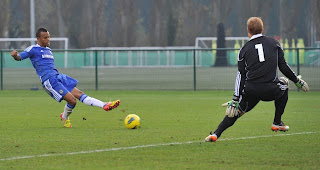 The reserves came from behind at home to Swansea this afternoon, as Ryan Bertrand scored a late leveller to earn a point. The England Under 21 left-back burst into the visitors' area 10 minutes from time before coolly finishing after he had been put in on goal by Kaby, cancelling out Stephen Dobbie's penalty that had come only a matter of minutes earlier after Sam Hutchinson had tripped Leroy Lita inside the area. It was a busy end to a low-key second half in which both sides had struggled to create goalscoring opportunities, though Romelu Lukaku had missed a header when well positioned. Either team could have been a couple of goals to the good in the first half, though neither goalkeeper had been overworked, and so a point can be considered a fair result. Coach Dermot Drummy was able to pick an attack-minded line-up with Brazilian Lucas Piazon making a competitive reserve debut from the left flank.