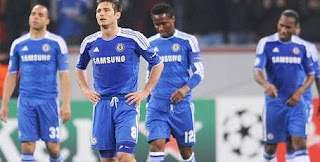 Not shared this before, but with one win in six games now I felt compelled to air my views on the starting eleven from last evening in the Champions League...

Petr Cech The 'keeper managed to make two brilliant saves in the space of a minute, but apart from that, his performance just wasn’t up to the mark. His inability to close down Sam, also proved to be costly and resulted in the German side scoring the equalizing goal in the game. 7 (for the saves)

Branislav Ivanovic The defender had a very solid game and seemed to be doing his job rather well. However, he was caught napping in the build up to Leverkusen’s equalizing goal. 6

David Luiz Had a poor game and kept giving the ball away. Needs to work on mentality and decision making. However, he seemed to settle down later on and proved more composed. 4

Jose Bosingwa started on the left in the absence of Ashley Cole: was smart going forward and managed to make some good defensive interceptions but not suited to this side of the pitch. 5

John Terry The defender seemed to finally be back to his best, as he made some brilliant tackles and held the line deeper. His defensive vision seemed better and he was a different player, in comparison to the one that was part of the Chelsea side of late. 7

Ramires Proved to be the engine in the Chelsea side once again. Worked hard, but seemed to tire down later on. Had a decent performance on the whole and is proving to be one of our few 'stars' this term. 8

Frank Lampard The midfielder started off on the back foot, but grew into the game as the match progressed. Could have scored a goal, but it managed to just evade him. Nonetheless, showed his class and capabilities. 7

Raul Meireles Played a holding role and didn’t get forward much. For me, our best player for much of the game. Made some crucial tackles and delivered some great passes. Unfortunate not to get forward more. 8

Juan Mata The Spaniard was unusually quiet during the game: made little contribution and struggled to get going. 5

Didier Drogba Scored a glorious opening goal of the game and seemed lively. Could have been awarded a penalty, but the referee chose to give the home side the advantage. 7

Daniel Sturridge Delivered a fine ball to Drogba, who then scored. Had a good solid game and used his pace quite well. A goal would have really been the perfect reward for his hard work in the match. 7
Subs:

Malouda Came on for Mata and could have got on the score sheet late on. 6

Alex and Mikel Made up the numbers for the remaining minutes of the game. Unfair to make any judgement on their respective performances.
Email ThisBlogThis!Share to TwitterShare to FacebookShare to Pinterest