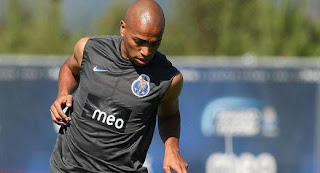 Chelsea are preparing a fresh swoop for Porto's Alvaro Pereira having missed out on the versatile Uruguayan last summer. Andre Villas-Boas is a keen admirer of the 25-year-old and made desperate attempts to bring him to Stamford Bridge following his own deflection from the Portuguese champions. Pereira's ability to play anywhere on the left-hand side of the pitch is what interests Chelsea most, with the club lacking a serious alternative to Ashley Cole having sold Yuri Zhirkov. He could also bring width to an otherwise narrow midfield. Chelsea's bid of around £15m in August failed to bully Porto into selling, but that will now have to be increased after Pereira signed a contract extension.
Email ThisBlogThis!Share to TwitterShare to FacebookShare to Pinterest