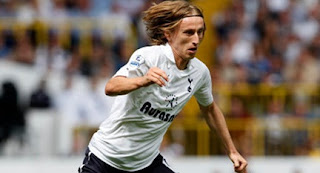 Tottenham are reportedly urging Luka Modric to make a decision on his future amid renewed interest from Chelsea. According to reports, Spurs are putting pressure on Modric to pen a new contract, and have offered him £100,000-per-week to stay at White Hart Lane. The Croatian playmaker, however, is said to be waiting until the end of the season before committing to Spurs. Chelsea tried desperately to bring Modric to Stamford Bridge during the summer, and had as many as three separate bids rejected by Spurs. The Blues' final offer was around £40m, but Andre Villas-Boas was unable to secure the 26-year-old. The Chelsea boss is, however, thought to retain an interest in Modric, while the player had attempted to force a move to west London in the transfer window.
Email ThisBlogThis!Share to TwitterShare to FacebookShare to Pinterest