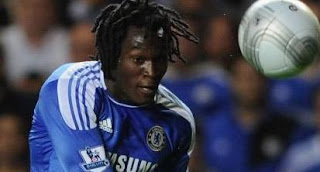 Everton claim they will try to get fringe striker Romelu Lukaku on loan in January. Lukaku, only 18, arrived at Stamford Bridge from Anderlecht in a summer deal that could ultimately end up costing the Londoners £18m. But he has still to start a league game for his new club - and there is no immediate hint of that changing. With Stoke City boss Tony Pulis also keen, Everton manager David Moyes hopes to make the first inquiries about a six-month Goodison stay. What no-one seems to have considered is that Lukaku has already played for both Anderlecht and Chelsea this season. He therefore cannot feature for a third club under FIFA rules. That's the end of that then.
Email ThisBlogThis!Share to TwitterShare to FacebookShare to Pinterest