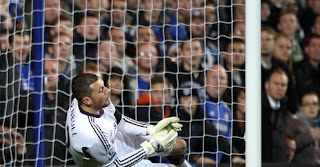 Liverpool advanced to the semi-finals of the Carling Cup with a 2-0 win against a disappointing Chelsea side at Stamford Bridge. Both goals came in the second half, from Maxi Rodriguez and Martin Kelly, the latter scoring for his boyhood club for the very first time, after Andy Carroll had a penalty saved before the interval by Ross Turnbull. The result marks the second time in 10 days that Kenny Dalglish's side had defeated the Blues on their own patch, and continues to put pressure on Andres Villas-Boas.

Both sides had penalty claims turned down in the opening 10 minutes, with Chelsea’s David Luiz booked after just three despite appearing to be brought down by Sebastian Coates following a trademark run from the back into Liverpool’s danger zone. And it was the visitors’ turn to feel aggrieved by the decision making of referee Phil Dowd when Carroll seemed to be on the receiving end of a clear shove as he anticipated the incoming cross from team-mate Jose Enrique. When Dowd finally decided to award a spot kick 20 minutes into the game, he initially failed to react to claims of handball by Alex from the Reds players before changing his mind soon after to the confusion of the home fans. Carroll’s penalty attempt was poor and Ross Turnbull kept it out, the second time he had overseen a penalty miss for the Blues in the competition after Fulham’s Patjim Kasami hit the post from the spot in the third round, a game Chelsea ironically won in a shoot-out after extra time. Josh McEachran struggled throughout the first half after weathering a couple of heavy challenges, and was replaced by Ramires before half-time.

Ten minutes into the second period, Chelsea had their biggest opportunity to move into the drivers’ seat when Luiz had a diving header cleared off the line after Frank Lampard’s free-kick came back off the crossbar. And three minutes later, they found themselves a goal behind after poor defending allowed Jordan Henderson to feed Craig Bellamy, whose assist gifted Maxi the honours of breaking the deadlock. After another five, the lead was doubled and once again Bellamy was the architect, picking out Kelly from a free-kick delivery to send the away fans, taking up their entire end of the stadium, into raptures.Villas-Boas reacted to the second goal by making a double change, bringing on Juan Mata and Nicolas Anelka in the hopes of salvaging the tie, while Lucas was forced off the pitch with an injury just like McEachran before him, with Charlie Adam taking his place on the field. But though the home side enjoyed a temporary spell of encouraging play, with Anelka kept out by a combination of Jamie Carragher and Jose Reina and the otherwise anonymous Fernando Torres forcing a pair of saves from his compatriot in goal, Liverpool saw out the final 10 minutes rather comfortably to move within one game of a trip to Wembley in early 2012.