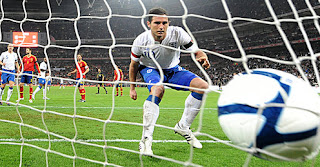 American 'soccer' team LA Galaxy could be in the process of recruiting Chelsea midfielder Frank Lampard as a replacement for David Beckham. It would need a considerable offer to prise Lampard, 33, from Stamford Bridge, especially since his sparkling form has silenced doubts over his future under new manager Andre Villas-Boas. Indeed, he captained, and scored the only goal, in England's defeat of world champions Spain. But Galaxy need to find someone close to Beckham's profile if speculation about him leaving the Home Depot Centre after next Sunday's sell-out MLS Cup final against Dynamo Houston turns out to be well founded.
Email ThisBlogThis!Share to TwitterShare to FacebookShare to Pinterest