Kevin De Bruyne would be a great for Chelsea 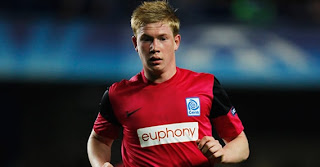 Chelsea target Kevin De Bruyne would be a great asset for the west Londoners, according to his manager Mario Been. The Belgian starlet has shone for Genk in the Champions League and was touted with a move to Stamford Bridge earlier this summer. De Bruyne is expected to move to Chelsea at some point in the future, where he would be a star according to his current boss. "His name is already in England. He's a great player. Very young and talented," said Been. "I think he'd do great if he went to England - in the Chelsea squad." Chelsea will renew their interest in De Bruyne in January, where they'd be expected to have to part with as much as £12m for the 20-year-old.
Email ThisBlogThis!Share to TwitterShare to FacebookShare to Pinterest