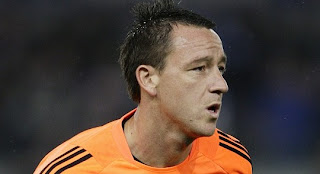 John Terry has reportedly been included in Fabio Capello’s preliminary England squad for friendlies against Spain and Sweden. The defender, who’s currently under investigation from the FA and police over alleged racist comments he made to Anton Ferdinand, is understood to have received the nod from the Italian manager on Thursday night. However, Capello will have to consult with FA chairman David Bernstein, general secretary Alex Horne and the FA's director of communications Adrian Bevington, before deciding whether to name Terry in his final squad, which will be announced at 8:00pm on Sunday.

QPR chairman Tony Fernandes has said he has no issue with Terry being included in the England squad while allegations are being investigated. Capello previously stripped the Blues centre-back of the captaincy before the 2010 World Cup over his alleged affair with former team-mate Wayne Bridges’ ex-girlfriend, but recently reinstated Terry as England skipper. The 30-year-old proclaims his innocence in the Ferdinand racism row, and is understood to want to retain the England armband. Steven Gerrard and Andy Carroll were previously selected when they had been charged by police with offences.
Email ThisBlogThis!Share to TwitterShare to FacebookShare to Pinterest