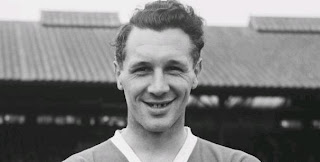 Jim Lewis, who earned a 1954/55 league champions medal with Chelsea, sadly died on Monday at his home in Kelvedon Hatch, Essex, at the age of 84. An amateur who joined in Septetmber 1952 from Walthamstow Avenue (which became, after several mergers, Dagenham & Redbridge FC), he scored 40 times for the Blues in 95 appearances in all competitions. Born in Hackney in east London, Jim was the son of another Jim Lewis, and helped Walthamstow Avenue to their first ever Amateur Cup triumph in 1952, playing in front of 100,000 against Leyton in the final at Wembley alongside future Blues teammate Derek Saunders. Jim is rated among the greatest non-professional footballers of his generation. He was a regular England amateur international and made the Great Britain Olympics squad three times from 1952 to 1960.He scored 39 goals in 49 games for the GB side. For Walthamstow Avenue he scored 423 goals in 522 games.